If your dog has been sleeping or laying close to you, this post will show you common reasons why they do it and what you should do about them.

So, why does my dog sleep or lay next to me? Possible reasons why your dog lays close to you are that it is being protective, it makes it feel safer, it gets rewards when it does it, separation anxiety, it’s waiting for something or that it is just being affectionate.

Since there are many possible reasons why it sleeps next to you, there are a number of things you can consider to help figure out the most likely reason. Once you have a good idea of the cause, it will also become a lot easier to decide what to do about it.

Why your dog sleeps or lays next to you

Below are common reasons why they do it and what would make them more likely.

The reason why it sleeps or lays near you could be that it is being protective. This would be more likely if it tends to be overly protective while awake and if it tends to sleep or lay near you in certain situations such as when other people are around.

It makes it feel more secure

The reason why it does it might be that it makes it feel safer. This would be more likely if it seems to have a timid personality and if it does it more in certain situations such as when there are noises outside. Also, dogs were bred to work alongside their owners and the other members of their pack for hours on a daily basis. So, being close to you could make it feel like it is around other pack members and cause it to feel more secure.

It is being affectionate

It could be the case that it is just being affectionate. This would be more likely if it tends to get you to rub its stomach before going to sleep and if it tends to actually lay its head or body against you when sleeping or laying near you.

It could be the case that you have actually been encouraging it to sleep or lay near you by giving it things it wants when it does it. If you often give it things such as belly rubs, extra attention or treats when it sleeps or lays near you, it will likely do it more in order to get more rewards.

Instead, it would help to reward it when it behaves the way you want it to, to stop rewarding it when it starts behaving in a way that you do not want and to give it positive reinforcement training.

In this case, it would help to take measures to reduce how anxious it is when you are leaving by doing things such as:

It’s waiting for something

The reason why it does it might also be that it is waiting to get something from you. This would be more likely if it tends to do it more when it has not been fed or given exercise yet and if it stops doing it after it has got those things.

Below are some things you can consider when figuring out the most likely reason why it has been sleeping and laying near you.

If it did not always lay or sleep near you, it would help to consider if anything else happened when it first started sleeping there. It could be the case that there was an event that caused it to start doing it

If it started doing it suddenly, it would be more likely to be due to things such as learning that it gets rewards when it does it, if a part of its daily schedule changed such as you started giving it exercise later or if you started working for longer hours.

It would also help to consider if there is a certain time that it tends to sleep or lay next to you since the timing could also have something to do with it.

For example, if it only seems to do it before getting exercise or being fed, it might be the case that it wants to make sure it is woken up when it is time for those things.

If you want your dog to stop doing it, below are some options you have and things you can do.

Train it to lay somewhere else

The first option would be to train it to lay where you want it to with the use of positive reinforcement training. This is where you encourage it to behave in a certain way by rewarding it when it shows signs of behaving that way.

To use it to get it to lay or sleep in a certain spot you could do something such as the following:

Avoid rewarding it for laying next to you

As mentioned above, it might be the case that it has learned that it gets things it wants when it sleeps or lays next to you. Instead, it would help to reward it when it sleeps where you want it to and to avoid rewarding it when it does not.

As mentioned above, it could be doing it because it has some separation anxiety. It would help to try to reduce how anxious it gets by giving it exercise, letting it pee and feeding it before leaving so that it does not have to wait so long.

If your dog seems to be doing it because it is looking for attention from you, one option would be to get up, leave and to ignore it when it does it so that it learns that laying near you doesn’t get attention from you.

This means that you should get your dog to lay somewhere else as shown in the video above, wait for it to calm down, tell it to sit somewhere else, reward it for behaving and not laying near you, then sit back down. If it tries to lay near you again, repeat the process.

It would also help to recognize when it is likely to lay near you and to redirect its focus onto laying somewhere else. 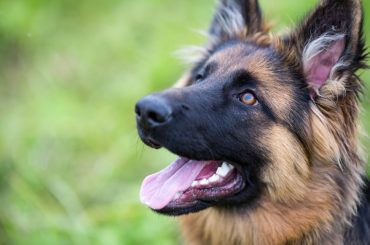 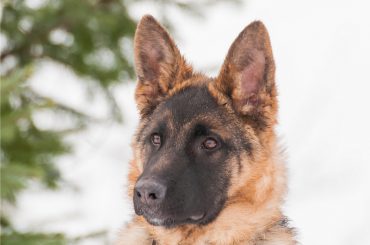