If your Labrador is always very calm you might be wondering why and if there is anything you could do about it. In this post, I will show you common causes why they can be calm and what you can do about it.

So, why is my Labrador so calm? Possible causes are that it is ill, there is an issue with its diet, it’s not getting enough exercise, it is getting older or that it is naturally calm.

There are a number of possible causes of your Labrador being calm. It would help to consider what would make each of the causes more likely. Once you have a good idea of the main cause, it should become a lot easier to figure out what to do about it.

Why your Labrador is calm

Below are some common causes of Labradors being calm and what would make them more likely to be the reason why yours has been being calm.

It is naturally calm

It could be the case that your Labrador is just naturally calmer than most other dogs. This would be more likely if it was even calm as a puppy and it didn’t suddenly become calm.

In this case, be glad that it is so calm. Having a Labrador that is overly calm is much better than having one that is destructive or difficult to control. With that being said, if you want it to be less calm you could try playing games such as tug of war with it or teaching it to play fetch.

It is getting older

The reason why it has started being calmer could be that it is getting older. This would be more likely if it has gradually become calmer over the course of months and years and if the vet has found no issues.

Adult Labradors will naturally be calmer than puppy Labradors which tend to be highly energetic. Labradors also become even calmer when they become older since it takes more energy for them to move around.

You encouraged it to be calm

It might be the case that you have actually trained it to be that way by rewarding it when it is calm. As mentioned above, this would be a good thing since it is being well behaved and not destructive.

The cause could be that there is an issue with its diet. This would be more likely if it has started being calm after a change in its diet or if it started doing it after feeding it a certain food.

You can look at this website to see what you should and should not be feeding your Labrador. It would also help to ask your vet, the next to you see them, whether or not you are feeding it correctly.

If your Labrador has started being calm and the weather has become hotter, it could be because the heat is causing it to feel fatigued. In this case, it would help to make sure that your Labrador has access to shade, water and a cool room. It would also help to exercise it in the morning or evening when the sun is not as strong.

The reason could be that it has gotten an illness. This would be more likely if it started being calm suddenly and if it has been showing other signs of being ill such as vomiting and fatigue.

If it does seem like illness might be the cause, the best option would be to take it to a vet.

Labradors are supposed to get daily exercise. When they do not get enough exercise, one possible result is that they become bored. This could be the reason why yours has been being calm which would be more likely if it becomes more energetic when it gets exercise. Generally, it is advised for them to get at least an hour of exercise per day.

Below are some things to consider about your Labrador being so calm.

When it became calm

If your Labrador has not always been so calm, it would help to consider what else happened when it started being calm.

If it did start being calm suddenly, it would make it more likely to be due to things such as illness, the weather becoming hotter or a change in its diet.

Whereas, if it has always been calm, it could be due to naturally being calm or you might have trained it to be that way when it was young.

When it becomes calm

If your Labrador is not always calm, it would also help to consider what is different when it is not calm.

If it tends to become calm at a certain time, it would make it more likely to be due to things such as the weather becoming hotter or having less energy after getting exercise.

What to do about your Labrador being calm

Below are some things that you can do about your Labrador being so calm.

If you are unsure of why your Labrador is so calm, it has become very calm suddenly or it has been showing signs of being ill, the best option would be to take it to a vet. By doing so you will be able to rule out the possibility of it being due to medical causes and to get expert advice tailored towards your particular Labrador.

Make sure its diet is right

As mentioned above, it could be the case that there is an issue with its diet that is causing it to be calm.

It would also help to give your Labrador lots of exercise. You can exercise it by walking it or by getting a dog walker to do it for you.

It would also help to train it to play fetch since it is a good way to get it to do lots of running.

Give it toys to play with

Another thing that you can do is to give your Labrador some toys to play with if there is not much for it to do where it spends most of its time.

Most Recommended For Labradors 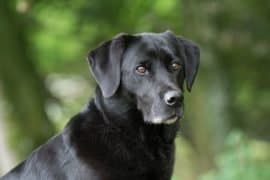 Why is my Labrador obsessed with my cat? 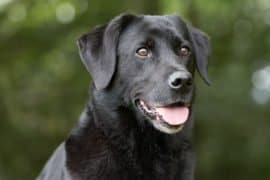 Why does my Labrador put its paw on me? 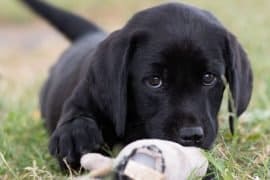 Why does my Labrador nibble on my cat?