So, why does my dog sit outside the shower? Possible reasons why your dog sits outside the shower are that it has separation anxiety, it is being protective, it has learned that the behavior is rewarded or it does it naturally.

Since there are a number of possible causes, it would help to consider what would make each of them more likely to be the main reason. Once you have a good idea of the main reason, it should become a lot easier to get your dog to stop doing it.

Reasons why your dog sits outside the shower

Below are a number of possible reasons why your dog sits outside the shower and what would make each of them more likely to be the main reason.

It might be the case that it has learned that it gets rewards for waiting outside the shower. If you tend to give it things such as extra attention, toys, or treats, when it waits outside the shower, it will likely do it more.

Dogs evolved as pack animals so it is natural that they will want to be around other members of their pack. The reason why your dog follows you to the shower could be that it naturally wants to be around you so that it feels like it is part of the pack and more protected. This would be more likely if it also tends to follow you to other places after already being fed and exercised.

If your dog did not always sit outside the shower, it would help to consider what else happened when it first started doing it. If it started doing it suddenly, it could be due to things such as learning that the behavior gets rewarded or something causing it to start being anxious when alone such as if you got a new pet.

What is different when your dog sits outside the shower

If there is a certain time that your dog tends to sit outside the shower, it would also help to consider what is different about the timing. For example, if it does not do it when it has already been fed or given exercise, it might be the case that it does it when it is waiting for those things.

It would also help to consider what sort of body language it shows when it waits outside the shower.

If it shows signs of being anxious such as crying, making itself appear small or pacing, it would be more likely that it is doing it due to something causing it to be anxious or fearful such as separation anxiety.

Whereas, if it is relaxed, when it waits outside the shower, it would be more likely that it does it naturally because it feels more secure around you or because it is being protective.

What to do about your dog sitting outside the shower

As mentioned above, it might be the case that it has learned that the behavior gets rewarded. Instead, it would help to reward it when it does not follow you to the shower and to avoid rewarding it when it does.

It would also help to try to limit reasons why it might be anxious. Some things to do would include, ensuring that it gets fed, exercised and that it can go out to pee before leaving it for a while.

Positive reinforcement training involves encouraging the behaviors that you want to see by rewarding them and discouraging unwanted behaviors by not rewarding them. To use it to get your dog to stop following you to the shower you could make it seem like you are going to the shower and reward it when it does not follow you. 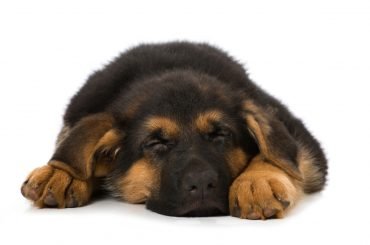 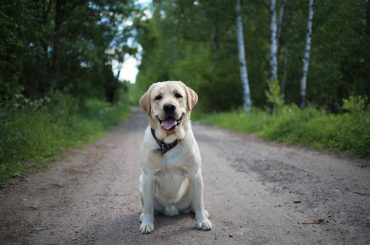