Possible reasons why your dog hides behind your legs are that it is being submissive, it is naturally timid, it is anxious or that you have inadvertently encouraged the behavior.

Since there are a number of reasons why your dog might have been hiding behind your legs, it would help to consider what would make each of them more likely. Once you have a good idea of the cause, it should become easier to get your dog to stop doing it.

Why your dog hides behind your legs

Below are a number of possible resaons why your dog has been doing it and what would make each of them more likely.

The reason why it does it is likely to be that it is being submissive. This would be more likely if it tends to do it more when other dogs are around and if it shows other submissive signs such as rolling onto its back.

Previous experiences with other dogs and people

The cause could be that another dog mistreated it in the past and now your dog is less comfortable around other dogs or people. This would be more likely if your dog started doing it suddenly and if you know that other dogs were aggressive towards it while it was still a puppy. In this case, it would also help to socialize it with friendly dogs when possible and to give it positive reinforcement and desensitization training as well.

It might be the case that your dog is naturally not very trusting of other people and dogs. This would be more likely if it has always hidden behind your legs when other dogs and people are around and it didn’t start doing it suddenly.

In this case, it would help to give it positive reinforcement training, desensitization training and to avoid rewarding it when it shows signs of being afraid.

It could also be the case that it does it because it has some separation anxiety. This is where being left alone causes your dog to become anxious. This would be more likely if it only seems to do it before it knows you will be going out and if it shows signs of being anxious when you are leaving.

If your dog does seem to be doing it due to being anxious then it would help to try and figure out what is causing it to be anxious and to make it stop. You might find that desensitization training will work particularly well which is where you slowly introduce the thing that makes it anxious and reward it for not being anxious.

The cause might also be that an injury has been causing it to feel anxious and vulnerable. This would be more likely if it has started doing it suddenly and if it has been showing other signs of being injured. In this case, the best option would be to take it to a vet.

As mentioned above, it could be the case that it has learned that it gets rewards for hiding behind your legs. Instead, it would help to reward it when it behaves the way you want it to, to avoid rewarding it when it hides behind your legs and to try to redirect its focus when it is about to do it.

The first option to try to do is to allow it to be around other friendly dogs as often as possible.

If it does not get the opportunity to be around other dogs very often then it will be more difficult for it to learn not to be afraid of them.

Positive reinforcement training is where you reinforce the behaviors that you want to see from your dog by rewarding it when it displays.

To use positive reinforcement training to get it to be less afraid of other dogs you would reward it after interactions where it was not afraid, reward it while it is near other dogs and it is not being afraid and stop rewarding it when it starts to become afraid.

If you can’t figure out why your dog is doing it or you cannot get it to stop, one option would be to get the help of a dog behaviorist. By doing so you will be able to get expert advice tailored towards your particular dog, to see why it has been hiding behind your legs and to see how to train it and get it to stop safely. 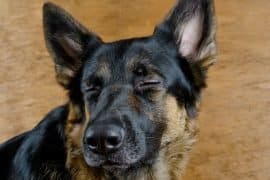