If your dog has been cowering, you might be wondering why and what you can do about it.

This post will show you a number of reasons why it might be doing it and what you can do about it.

So, why does my dog cower? Possible reasons why your dog cowers are that it was mistreated by someone, is unsure of its environment, is ill or injured, you were aggressive towards it, or that it is still young.

There are actually a number of things that you can consider when trying to figure out why your dog cowers. Once you have a good idea of what is causing it to cower, it will become much easier to get it to stop.

Why your dog cowers

Each of the different reasons that it might be happening will likely come with some clues.

Below, I will mention a number of reasons why it might be doing it and what would make them more likely.

The reason that your dog has been cowering could be that someone mistreated it.

This would be more likely if your dog was recently adopted from a shelter. In this case, it would be likely that it will improve as it gets more comfortable in its new environment. However, you can help it by giving it positive attention in the form of training, exercise and play.

If it has started cowering suddenly then it might be the case that someone mistreated it recently. This would be more likely if it cowers more when a certain person is around.

It’s unsure of its environment

In this case, it is likely that it will become more comfortable over time and it would help to give it lots of positive attention by walking it, playing with it and training it.

Related: why does my dog not like to cuddle?

The reason that it has been cowering might be that it is ill or injured. This would be more likely if it started doing it suddenly, it has been acting unusually in other ways and if it has shown other signs of being ill.

If you think that illness or injury might be the cause then the best option would be to take it to a vet.

You are aggressive or emotional around it

If you are aggressive or emotional around your dog then it might also be causing it to cower. Dogs will usually be very in-tune with their owner’s emotions and will change their behavior based on the emotions of the owner.

When interacting with your dog it would help to be calm and to avoid punishing it or being aggressive when it does things that you do not like.

It is still young

Many dogs will go through a more timid stage while they are puppies. If your dog is still a puppy then it could be that it is going through this stage.

In this case, it would be likely that it will start to cower less as it gets older. However, you can speed up the process by spending more time around it and giving it lots of attention.

Related: why is my dog obsessed with my cat?

Below, I will mention some particularly helpful things to consider when trying to figure out why your dog cowers. Once you have a better idea of the cause it will be easier to take the appropriate action.

If your dog always seems to cower

Considering whether or not your dog is always cowering would be helpful.

If you notice that it only seems to cower at certain times then it would make it more likely that it is due to things such as someone being around that it doesn’t like or a certain thing that scares it like sirens or fireworks.

If it always seems to be doing it then it could be that it is scared of its environment, going through a timid stage as a puppy or that someone has been consistently mistreating it.

When your dog first started cowering

The timing of when it started doing it would also be helpful to consider.

For example, if it started doing it after being adopted then it would likely be due to mistreatment by previous owners or being unsure of its new surroundings.

Whereas, if it suddenly started doing it without any apparent cause then it could be due to being ill or injured.

Who is around when your dog cowers

It would also help to consider who else is around when it tends to cower.

If it seems to cower when a certain person is around then it could be that they mistreated it. However, it might also be the case that it is nervous around people that it does not know especially if it didn’t socialize much as a puppy.

How to get your dog to stop cowering

There are a number of things that you can do about your dog cowering. The best option for your dog will largely depend on the cause of it doing it.

Be calm around your dog

When interacting with your dog it would help to be calm. By doing so you will be able to avoid having it become scared due to thinking that you are being threatening.

Give it exercise and play with it

Dogs will usually require a lot of exercise on a daily basis. Depending on the breed they can require as much as an hour of exercise per day and sometimes even that is not enough.

If your dog is not getting much exercise it would help to make sure that it gets at least the amount that is recommended for its breed. By doing so you will also be able to get it to be more comfortable with you and to be less likely to cower.

Reward it when it does not cower

Another thing that you can do is to reward it when it does not cower or it shows signs of not cowering. By doing so you will be able to teach it that not cowering results in it getting things that it wants.

It would also help to avoid rewarding it when it does cower. If you reward it when it cowers then it might learn that cowering gets it what it wants which could reinforce the behavior.

It would also help to avoid punishing your dog. If you do punish it then it will not necessarily know why and it could cause it to become resentful towards you.

If it does behave in a way that you do not like, it would help to avoid rewarding it and to give it positive reinforcement training so that it learns to behave how you want it to.

Get help from a vet

If you are unsure of why it is cowering, you cannot get it to stop or it has been doing it for many months then it would be helpful to take it to a vet. By doing so you will be able to get expert help specific to your particular dog.

Our favorite: Ollie pets - it's good because it tailors the food to your dog's specific needs Get 50% off your first order with this link. 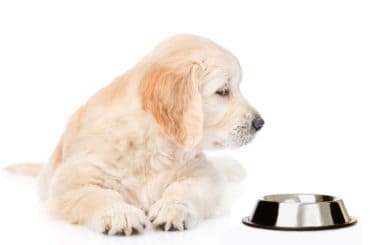 Why does my dog leave food in his bowl?

Why does my dog take so long to eat?